It’s time to introduce you to my precious dog Oliver! I adopted him last year from the Pope County Animal Shelter. He was six months old when I adopted him last September, and he is now a year and a half old. I absolutely love him! He was extremely malnourished when I brought him home – so much so that I could physically see the indentions between his ribs. However, that is definitely not the case now. He went from a weight of about 15 pounds when I adopted him to weighing around 30 pounds now. Here is a before and after from the first day I brought him home to a pretty recent picture of him. 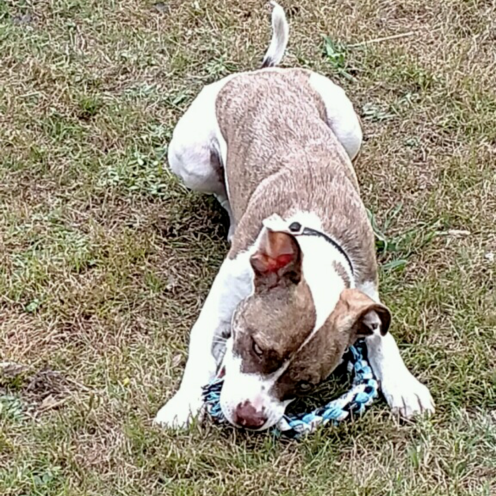 He loves to be outdoors, and rarely wants to come inside, even to sleep! He used to come in every night, but in the summer it is a feat to get him inside at all. Since I brought him home in the fall, snow was not far away. He absolutely does not like to be wet in any way shape or form so I was not sure how he would react to the snow. He did a lot better than I thought he would though. I wrapped him up in his little coat and took him out in the front yard. He lasted about 15 minutes before he was over it and trying to open the front door to get back inside.

A couple months down the road, I took him to the park with some of the boys in my mom’s nursery class. He had a blast! Oliver is a curious dog and the park had so much stuff he just wanted to sniff out – other dogs’ scent, people, food, bugs, etc. It was still a little chilly outside so he had to wear his coat out to play. The boys that we took with us just love Oliver and were so excited to get to play with him in a such a large open space. I even got him to go down a slide with me. That did not exactly go over well with him but we both made it out alive. 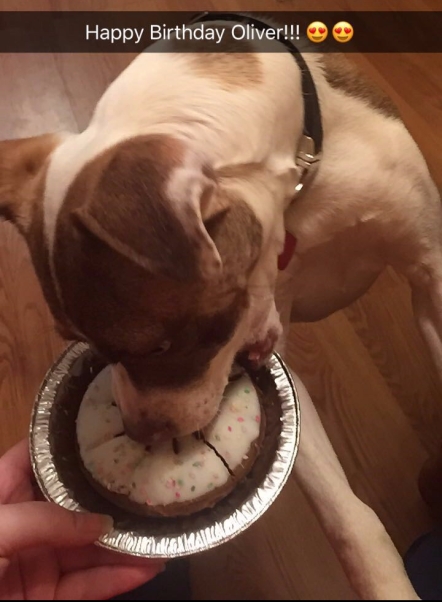 Next in my journey with my sweet pup came his birthday!! February 2017 he turned a year old. I bought him a little birthday cake made of doggie-friendly ingredients. However, my neighbor’s dog decided to “share” a spray can of gunk remover with Oliver which he promptly ate because he is part GOAT so he spent his birthday very sick. When he did get around to the cake though he loved it! I’m sure you can see the look in his eyes in his picture that says it all. He devoured it! 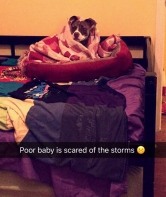 Since I adopted him from a shelter, he has some anxiety issues. This means no loud noises, storms, sirens, or anything of the sort. He is absolutely terrified of storms. Sometimes even medication doesn’t help, and Oliver just stays awake all night shaking from fear. I was super nervous about the Fourth of July with our neighbors going firework crazy, but he actually did so much better than I thought that he would. He even sat outside with me to watch them!

Recently, I took Oliver to the Vet because he has started to have seizures. With the first one, I thought that maybe he had just gotten into something he wasn’t supposed to. Then, about a week and a half later, he had another one. I knew it was time to take him to get checked out. Some blood work and a big ticket later, we found out he has epilepsy. He will continue to have seizures as long as he lives. We will medicate him if they get worse or more frequent.

I hope you enjoyed getting to read about my Oliver! Leave a comment or follow my blog if you enjoyed my post. Thank you and God Bless.