I had the absolute honor and privilege of teaching third and fourth graders at vacation bible school this year. It was my first time to teach a bible study class at VBS. In the past I have helped teach crafts or bible study, and last year I led music. There is honestly nothing like teaching bible study and I loved every single minute of it. My sweet little sister Rylie helped me teach and did a wonderful job. I wish it had never ended!

We had a wonderful start to our vacation bible school week on Sunday night. I actually started out without a class and ended up with three students about half way through the night. We got warmed up and straightened out the kinks, and we were ready to roll! Our lesson was on Creation and how God intended for us all to go to heaven and gave a perfect relationship with Him like Adam and Eve did originally in the Garden of Eden where they had everything they would ever need and got to walk daily with God. The only stipulation was that they did not eat from the Tree of Knowledge for God had forbidden it. This was just the start to God’s perfect plan for the week!

The second night God was moving in our kids. I could see their wheels turning and the seeds were planted. My class size double to six amazing kids that I got to share the gospel with. I taught the kids about the first sin and how Adam and Eve disobeyed God, breaking their perfect relationship. Satan took the form of a serpent and convinced Eve to eat fruit from the Tree of Knowledge against God’s will. Eve then convinced Adam to eat the fruit too. They realized they were naked and hid from God. However, God already knows everything we say and do before we do them. He knew they were naked so He asked them why they were hiding. When they answered that they were naked, he asked them how they knew that? God cast them out of the garden where they would endure pain and have to till the earth for food and make their own clothes for covering. I got to lead one of my girls (Josie) to the Lord as she surrendered her life to Him and was saved. 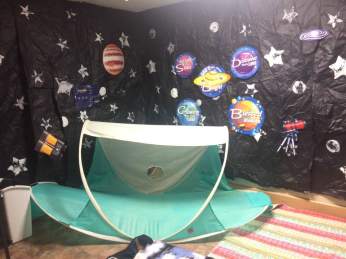 This was probably one of my favorite nights of the whole week. We talked about how Isaiah prophesied Jesus’ birth and how that promise was fulfilled. He prophesied that a virgin would give birth to the Son of God. An angel came to Mary in a dream and told her that she would become pregnant with the Son of God and to name Him Jesus. Afterwards, an angel came to Joseph in a dream to tell him that he should not be afraid to marry Mary because God had chosen her to carry the Son of God and that they were to name the baby Jesus. Jesus was born in Bethlehem as Isaiah prophesied. I got to lead three of my girls (Sidney, Dakota, and Taegan) to the Lord on this night and I thought my heart was going to burst! I was absolutely in awe how God was using me to do His work in these kids. God showed up on the third night, and I was so excited to see what else He had in store for us in the rest of the week!

This was the last full night of our VBS week where I taught about how Jesus restored our relationship with God when he died on the cross for our sins to save us. We talked about how God sent Jesus just for this purpose and how he was 100 % human and 100 % God as he walked in earth performing miracles. Jesus was the perfect lamb that was sacrificed. Before HE was crucified, Peter denied knowing Him three times before the rooster crowed as it was prophesied. His blood covered all our sins as long as we ask for forgiveness, making it possible for us all to have a personal relationship with God. He rose from the dead three days later from the tomb where He was buried to prove that not even the grave could hold Him. I got to lead one of my girls’ little brother to the Lord (Bentley). It was the sweetest sight as they walked up together so I could pray with him.

After Jesus died on the cross and rose form the dead, He appeared to the disciples twice. One of these occasions was when Jesus came to peter and the disciples while they were fishing. They had been fishing all day and had caught nothing. Someone appeared in the distance, instructing them to cast their net on the other side of the boat. As they cast their net to the right side of the boat, they caught 153 large fish! There were so many fish that they had trouble reeling them in with the net – they were just too heavy. As Peter realized the miracle he had just witnessed, he knew that it had to be Jesus, He jumped from the boat and swam to the shore to meet him. They all had breakfast together. When they had finished eating, Jesus said to Simon Peter, “Simon son of John, do you love me more than these?” “Yes, Lord,” he said, “you know that I love you.” Jesus said, “Feed my lambs.” Again Jesus said, “Simon son of John, do you love me?” He answered, “Yes, Lord, you know that I love you.” Jesus said, “Take care of my sheep.” The third time he said to him, “Simon son of John, do you love me?” Peter was hurt because Jesus asked him the third time, “Do you love me?” He said, “Lord, you know all things; you know that I love you.” Jesus said, “Feed my sheep. 18 Very truly I tell you, when you were younger you dressed yourself and went where you wanted; but when you are old you will stretch out your hands, and someone else will dress you and lead you where you do not want to go.” 19 Jesus said this to indicate the kind of death by which Peter would glorify God. Then he said to him, “Follow me!” Jesus’ death and resurrection restored the relationship that was broken so long ago, and is the reason that we can continue to grow in our relationship with God.

I had a blast at VBS this year and cannot wait to teach again next year. I was so blessed to get to lead five lives to the Lord. God really touched my heart this week and blessed me beyond belief. He showed up and showed out this week. We had a total of nine salvations all together this week, and I could not be more proud. I am so thankful for the wonderful church family that I have and their dedication to serving the Lord. They made this week even better to be serving by their side.